GoGocycles.com is the best place to get a deal on a 1975 Goldwing for sale by private owner, CHEAP! This is THE place to buy, sell or trade that old 1975 Honda Goldwing GL1100 or any parts you have lying around the shop so that you can upgrade to your dream bike or just raise some cash to pay some bills.

We help individuals get the most money out of their motorcycle's sale by offering a place to post free classified ads without the bother of re-listing their used motorcycles for sale every couple of days on CL when their classified ad expires. GoGoCycles.com's policy is that ads will remain visible until the person that posted them notify us that their bike has sold or that they have pulled it off the market. 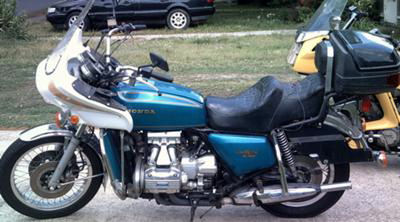 All you have to do is use the form that you will find below on this page to type a detailed description of your 1975 Gold Wing or the parts that you want to sell, name your price and upload a couple of pictures so that our visitors can see the condition and features of the motorcycle.

I have a 1975 Honda Goldwing GL1000 for Sale that has a beautiful blue paint color. This old touring motorcycle only has 54,000 miles on it! This …

The 1975 Honda Goldwing has a beautiful Maroon and Black paint color scheme and incredibly low mileage of only 56,157 actual miles which is is a rare find …

I have a 1975 Honda Goldwing GL1000 and some used parts for Sale including multiple accessories. The sale includes not 1 but 2 . I am selling a pair …

I have a solid, 1975 Honda Goldwing GL1000 OEM Muffler for Sale is in good shape but the left chrome tailpipe is rusty all the way through to the baffle. …

Information that you should include in your description would be any modifications that have been made to the 1975 Honda Goldwing, cosmetic as well as mechanical problems, the brand, the model number and its condition.

Those are just some suggestions but you get the idea; the more details that you share will make your 'Wing stand out in a sea of classified ads that leave a lot to be desired in the "transparency" department.

The Honda motorcycle company rolled out this series and it was so well-received that it remained in production up until 1979. This model is known to be one of the motorcycle masterpiece of the mid 70s.

The GL1000 had a honey of a motor that provided very high speeds making it the darling of touring enthusiasts.

the bike was its non inclined nature that left it straight with the back unlike the v-twin he had been used to though he says he has been used to the bike.

Reviews of the 1975 Honda Goldwing

One review written by an experienced rider that recommends buying that 1975 Goldwing for sale that you've found in our classifieds claims that the 1976 GL1000 model was the naked cruiser of his dreams. He says he has now owned his for going on forty years and sings the praises of the Goldwing's 80 horsepower engine and its ability to maintain high speeds in all conditions.

Another consumer reviewer states that the shaft-drive was a key feature that caught his interest when shopping for a long distance bike. Other positives on his list were the saddlebags, the AM/FM radio, floorboards and an onboard air compressor.

Another reviewer says he kicked the V-twin engine to the curb and much prefers the GL1OOO due to its quiet and powerful nature.

One common complaint is that the manual hydraulic valves must have periodic adjustments that can cost up to three hundred dollars or more.

It is also noted that the manual ignition can give you some problems (corrected in later years).

Things to look for when considering a 1975 Goldwings for Sale:

The good news is that you are not alone in looking for a 1975 Goldwing for sale or when looking for used parts and accessories. This bike still has a large fan base which keeps these items available for purchase.

Please make plans to visit GoGoCycles Used Motorcycles for Sale often so that you will be the first to know when one of our visitors adds a new listing for a 1975 Goldwing for sale in our classifieds.