1983 may have been the final year that the 1983 Honda Goldwing GL1100 was produced but still, a couple of decades later, owning this year model is still on a lot of guy’s "motorcycle bucket list".  For sure, it’s a sharp touring motorcycle and is considered by many to be one of the most reliable Goldwing motorcycles and it makes sense that so many of you want to buy one.

A low mileage 1983 Honda Goldwing can offer a lot of riding pleasure for very little money and may be just what you need to ride off into the sunset with your lady at the end of a long week.
Reviews that are written on the performance and features of the 1983 Goldwing all indicate that if you are in the market for a good touring motorcycle, don't want to pay big bucks for a new bike and are shopping around for an older, well-maintained bike.

1983 Honda Goldwings for Sale by Owner 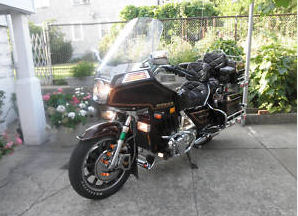 The 1983 Aspencade Goldwing for sale has a new battery, a new back tire and new brakes. The 1983 Honda Goldwing Aspencade 1100cc also has a clean title. …

The 1983 Goldwing 1100 Interstate for sale has full lights that all work including amber color front fork and front scoop lights, adjustable fog lights …

The two 1983 Goldwings for sale are both in near perfect condition. This motorcycle is the standard model was one of the last Honda Goldwings made that …

The 1983 GOLDWING INTERSTATE 1100 FOR SALE can be yours for less than $2000! The bike has a new front tire, new brake pads and a custom motorcycle seat …

Is there anyone that can talk me through how to fix my 1983 Honda Goldwing Aspencade problems? I just bought a 1983 Goldwing l100, Interstate Aspencade …

Finding a Nice 1983 GOLDWING for Sale
If you are in the market for just such a motorcycle and this is your visit to GoGoCycles you should take a minute to become familiar with how our classifieds work.

When you find a 1983 Goldwing that interests you, read the classified to see how the seller wants potential buyers to contact them. Sometimes they post a phone number and other times they might prefer to be emailed.

If you would like to communicate with the seller of a 1983 Goldwing for sale that fits your criteria, use the COMMENTS link found at the bottom of the classified ad to leave your questions, make requests and leave your contact information in the form and then press the button to send it. The recipient of the e-mail will then reply in whatever way you specified IF he or she still has the Goldwing for sale. Sellers that post ads are supposed to let me when they sell their motorcycles but sometimes they tell me so don’t get all huffy with me if they don’t email or call you back.

HOW to Advertise a 1983 HONDA GOLDWING
Here are a few steps that I’ve found to be the best way to advertise your used GoGoCycles Used Motorcycles for Sale that should get you the best results possible. Right off the bat you should write a detailed description of your Honda using good grammar (PLEASE DON’T TYPE IN CAPS and spell check your ad). Include as many details as you can think of including the year it was manufactured, a list of any accessories that you may have added during your ownership (and any factory parts that you kept that will come with the Goldwing), as well as any motorcycle helmets, saddlebags or gear that you are including in the deal. Take as many as four pictures of the 1983 Honda Goldwing for (or just one if you think that’s all you need) or if you would like you can skip this step completely but if you do so you should expect to get lots of (snarky) comments from potential buyers that want to know why there are no pictures on the ad! When you are done you can preview your advertisement to be sure it looks like you want it to and then you can submit it. THEN you should consider checking the box that pops up after the preview indicating that you would prefer to ONLY to get comments from potential buyers and not every single time a classified as posted here.
FacebookTwitterPinterestTumblrRedditWhatsApp