Welcome to GoGoCycles, the best place to advertise your 1985 Honda Goldwing for sale or to buy or sell used 1985 Goldwing parts and accessories.  Why do you want to hang onto a seat, engine or other stuff when you can make some fast cash just by posting a classified?


Generally we have listings for privately owned Goldwings but if you are a dealer, we will accept your ad providing that you include a complete description of the bike for sale of at least 250 words in length or more and a color picture. Or if you are thinking more about buying a motorcycle than selling one, scroll down to see our inventory of cheap, used custom Goldwings for sale by private owner or use the form to advertise your own 1985 Goldwing for sale. 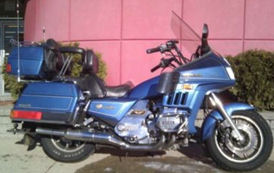 1985 Goldwing 1200 Limited for sale. This is a decent 85 Honda Goldwing full or used parts or ready for restoration. The old Wing has a new battery, …

The 1985 Honda Goldwing Aspencade and Motorcycle trailer for sale lots of brand-new parts so it is ready to ride. The 'wing has new timing belts, temperature …

I have decent 1985 Goldwing 1200 LTD for sale that can be used as a parts motorcycle. The Honda '85 model Limited edition could also be restored. …

If you don’t have a 1985 Goldwing for sale but would like to sell some of the custom parts and accessories that you never got around to installing (we‘ve all been there), we may be able to help you out. If the parts are specifically for a 1985 Honda Goldwing, go ahead and advertise them on this page, but you might get better results if you post them in the used Honda motorcycle parts category; I’ll let you be the judge on which classified ad section suits you best. To get more details on how to get the best results possible from your motorcycle classifieds, just scroll down the page and you will find a few tips to help make a fast sale.

FINDING A 1985 HONDA GOLDWING for SALE

If you are looking for a 1985 Goldwing for sale to buy and this is your first visit to GoGoCycles Used Motorcycles for Sale it would be good to learn how our system work since it’s different (but BETTER) than other motorcycle classifieds sites, in my opinion.

HOW DO I SEND THE SELLER AN EMAIL?
Do not panic if you don’t see a phone number or email on an ad. If you want to send the owner of a 1985 Goldwing a message, all you have to do is click on the COMMENTS link found at the bottom of the classified ad and type your questions, requests and your own contact information in the form. When you are done send the email and the owner will contact you IF the 1985 Honda Goldwing is still for sale. The individual owners that post advertisements on GoGoCycles are asked to tell us when they no longer have their motorcycles for sale but sometimes they simply don’t let us know so don’t get all mad at me if they don’t email or call you back.

HOW TO ADVERTISE YOUR 1985 GOLDWING for SALE
Here is the best way to advertise your 1985 Honda Goldwing for sale that will get you the best results.

Write a detailed description of your ’wing (PLEASE DON’T TYPE IN CAPS and spell check your ad) . Include as many details regarding the 1985 Goldwing or the parts and accessories that you have for sale including how many owners it has had if you happen to have that information, a list of any accessories that you added to the bike during your ownership (and any factory parts that you kept that will come with the sale), helmets, saddlebags or gear that you are including in the deal.

In addition to that information, you should take pictures of the 1985 Honda Goldwing for sale from different angles that show it to its best advantage. Upload as many as four photos of the 1985 Goldwing for sale (or you can have just one if you think that’s all you need). You can post your classified with no pictures, but get ready for lots of (negative) comments from potential buyers that want to know why there are no pictures on the ad!

When you are finished you can preview your classified to be sure that you didn’t forget anything and then you can finally submit it. I would like to suggest that you check the box that pops up after the preview indicating that you would prefer to ONLY to get comments when potential buyers comment rather than make your email address public and get a bunch of spam.