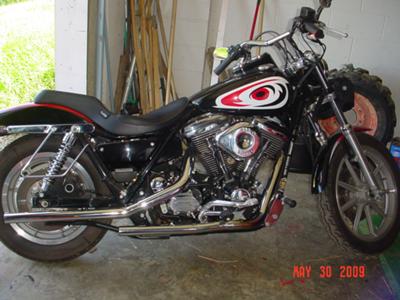 It is said that the 1988 Harley LowRider FXR for sale that you see in the pictures was a celebrity owned motorcycle! I'm not sure about that but I do know that it has only 8,500 original miles and is in excellent condition.
The Harley is a 1988 Harley Davison FXR Lowrider with a 1340 cc V-twin engine and a 5-speed transmission.

I just installed an all Brand New clutch system, Primary Gaskets, and new operating fluids due to the bike having been left sitting in the garage for the last couple years.

It's in top notch condition and low miles, actually not even broke in good.


It is 100% ready to ride and whoever buys the 1988 Harley LowRider motorcycle will be very pleased. It has had some upgrades that include a softtail rear fender, an F&S carb and airfilter intake, Corbin motorcycle Seat, Dual Straight Exhaust Pipes, Custom turn signals, Saddlebag Racks and drag handlebars.

No real changes or modifications, just some nice clean looking customized features that gave the bike an excellent throttle response with some added performance including increased horsepower. The motor itself is all original factory stock so it's very reliable.

I bought the bike about 6 years ago from EasyRiders of Columbus dealership with virtually no miles on it and as you see I have not had the time to be able to ride it much myself. I was informed that I'm the second owner and the original owner was Kevin Deneen that was a player for the Columbus Blue Jackets NHL. Before that he was a member of the North Carolina Hurricanes Hockey Team which was the reason that he had the tank painted with the Hurricane Logo.

I'm sure that paint was working for him being a Blue Jacket so I was told he traded it in for a very expensive custom motorcycle (probably with a paint color that was better suited to his team?).

I really love the bike and I was very lucky to come across one with extremely low mileage that saved me a ton of money compared to a brand new bike. I would like to keep 1988 Harley
Go here to see

this year's top-rated tires for less!
LowRider but I have been off from work for about a year due to an injury that caused me to lose part of my leg (NOT from a WRECK OR ANY WAY MOTORCYCLE RELATED) So I could use the money and need to sell.

I believe the bike is priced so cheap that you could probably put some miles on it and sell it again and not lose anything but like I said I will work with the price some and negotiate if I need to because I am a motivated seller.

Also wanted to include some imformation about Kevin Deneens Hockey Career:
From Wikipedia, the free encyclopedia
Jump to: navigation, search
Position Right Wing
Shot Right
Height
Weight 5 ft 11 in (1.80 m)
190 lb (86 kg; 13 st 8 lb)
Pro clubs Hartford Whalers
Philadelphia Flyers
Carolina Hurricanes
Ottawa Senators
Columbus Blue Jackets
Nationality Canada
Born October 28, 1963 (1963-10-28) (age 45),
Quebec City, QC, CAN
NHL Draft 56th overall, 1982
Hartford Whalers
Pro career 1984 ? 2002
Kevin William Dineen (born October 28, 1963 in Quebec City, Quebec) is a retired professional ice hockey player and is currently the head coach of the Portland Pirates of the American Hockey League. Outside of the world of ice hockey, Dineen is a spokesperson for the Crohn's and Colitis Foundation of America.1 He is the son of former NHL player & coach Bill Dineen and a brother of former NHL players Gord and Peter. His other brothers, Shawn and Jerry, were minor league players. Although born in Canada, Dineen spent much of his youth in the United States, while his father Bill Dineen played and coached professionally.

The 1988 Harley LowRider FXR for sale is located in Mt. Vernon Ohio and my asking price is $7500.00 or your best offer whichever is higher so hurry and make your bid so you have a chance to own a celebrity motorcycle for a very cheap price.

If you are interested you can E-Mail me using in the space below provided by GoGoCycles Used Motorcycles for Sale. Before you make your next move you should note that PAYMENT HAS TO BE CASH OR CASH IN PERSON AT THE BANK.

Join in and write your own page! It's easy to do. How? Simply click here to return to HARLEY DAVIDSON LOW RIDER.