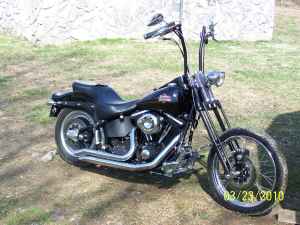 I have a 1999 Harley Davidson Night Train Softail for sale with a black DNA springer front end on it this year. The Harley Night Train softail has a chopper bullet head light, custom black Z bar apehanger handlebars and oversized 2 inch risers, S&S super E carb and Andrews 27 cams were already installed when I bought it.
It has new rubber plus I put a stator, coil, and battery on it last year (stator went out last year at little sturgs and the Harley Davidson motorcycle technician said I better go ahead and replace it all).

The used Harley Softail for sale is very nice with only 23,000 original miles but its condition is not perfect because it has been ridden and has normal wear although it has no dents.

The 1999 Harley Davidson Night Train Softail is a very nice bike that cranks, runs and rides great and I haven't seen another Harley Nighttrain like it.

The motorcycle gets lots of admiring looks and compliments but need to sell because I am buying a house and getting married.


The Harley comes with an extra set of exhaust pipes, (I believe them to be short shots but I'm actually not sure, but they look very nice and the chrome is good).

As far as accessories for the Harley night train, the deal includes a a quick detach sissy bar and a backrest for the driver.

If you need it I still have the Harley's OEM brake hose and clutch cable as well as a chrome rear pully cover and everything GOES WITH THE BIKE!

If you're interested or have questions about the night train please contact me by typing your questions and contact information in the space below provided by Strike Lightning and I will get back with you as soon as possible.

Strike Lightning would also encourage bikers to submit a review of the 1999 Harley Davidson Night Train Softail for sale to help potential buyers make informed decisions and to benefit the biker community as a whole.