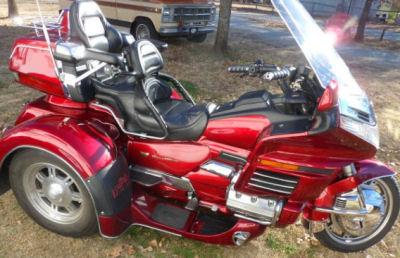 The 1999 Honda Goldwing Three Wheeler for Sale is a GL1500 trike that was converted with a motor trike conversion in 2007. The motorcycle has EZ steer, air ride suspension,reverse, a backrest, AM/FM radio, cassette player, an intercom system, cruise control, aqua floorboards, a passenger arm rest and cup holders.

this year's top-rated tires for less!
A motorcycle trailer hitch, chrome exhaust, a lower taillight kit and just 19241 miles on it!

If you would like to write a review or voice any opinions on the GL1500 three wheeler for sale, you may use the comments form below this ad to do so.

Thanks for visiting GoGoCycles Used Motorcycles for Sale and for taking a look at my 1999 Honda Goldwing Three Wheeler for Sale.

The location of the Goldwing for sale is in the Texoma area and in my opinion my asking price is cheap enough that it can't be beat on Craigslist or in an Ebay auction; $18500.

If you want to take a look contact me and don't forget to mention that you found this ad on GoGoCycles Used Motorcycles and Parts for Sale www.gogocycles.com.

Join in and write your own page! It's easy to do. How? Simply click here to return to HONDA GOLDWING TRIKES CLASSIFIED AD INVITATION.