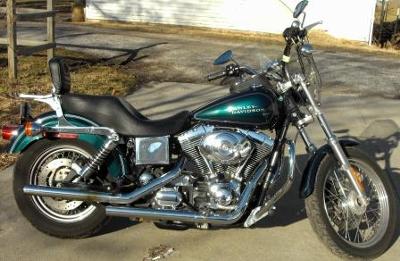 As bad as I hate it, I'm putting the 2001 Harley Dyna Lowrider up for sale that you see in the pictures. It's running great as it should be with only 20,000 miles on it. It's got lots of chrome and looks even better when you see it in the sunshine than it does in photos. To see it in the best light, you should make an appointment to come and take a look today.

this year's top-rated tires for less!
Here are the details on the Harley Lowrider. It's a 2001 Harley Davidson Lowrider that's been equipped with a sissy bar, a removable windshield and a custom motorcycle seat. The factory seat will be included in the deal.

It has a custom carburetor and a 5 speed manual transmission.

It's painted a great shade of Emerald Green.

There is an alarm system so that nobody can easily steal your Harley Dyna Lowrider after you take it home and the Harley service manual in case you ever need it.

I'm asking $9,750 for the 2001 Harley Davidson Dyna Lowrider for sale. If you're interested you can reach me by e-mail using the comments form found directly below this classified to make an appointment or to arrange for pickup and payment.

I'm happy to answer questions from serious buyers but might get impatient with tire kickers that want to jack me around and waste my time.

Join in and write your own page! It's easy to do. How? Simply click here to return to HARLEY .