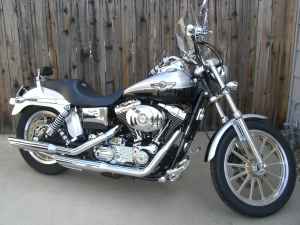 2003 Harley Davidson Dyna Lowrider FXDL Anniversary Edition silver and black (this photo is for example only; please contact seller for pics of the actual motorcycle for sale in this classified)

this year's top-rated tires for less!
This nice bike has the 1450L Twin Cam 88 engine.

Those of you that know a thing or two about this special anniversary edition motorcycle can use the comments form below this ad to write a review or voice any opinions that you may have formed from your personal experiences with a motorcycle similar to the 03 model Harley Davidson Low Rider for sale listing any problems with its performance, where to find used Harley parts for a 2003 model or anything of interest that you feel potential buyers should know.


Thanks for visiting GoGoCycles Used Motorcycle Classifieds and for your interest in the 2003 Harley Lowrider.

The location of the 2003 Harley Davidson Dyna Lowrider FXDL Anniversary Edition Austin TX Texas and in my opinion my asking price is cheap enough that it will be difficult to beat on Craigslist or on Ebay; just $7995.


If you want to take a look or have questions, call me (NO EMAILS) 2eight 1-7eight 7-seven 0five7 for more details or to request picture and don't forget to mention that you found this ad on GoGoCycles Used Motorcycles and Parts for Sale www.gogocycles.com.
Go here to see more