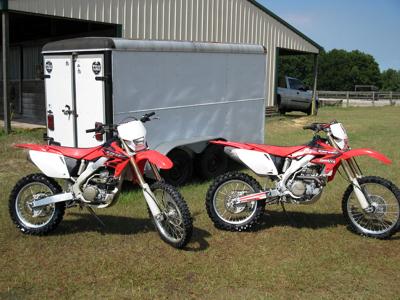 Red and White Honda CRF 250 X for Sale & Honda CRF 450 X (this photo is for example only; please contact seller for pics of the actual dirt bike for sale in this classified)

The 2005 Honda CRF 450 X for Sale is in basically stock concition except for a Renthal Fat Bar, bendable levers, a jetted carb and opened air box, Scotts Steering Stabilizer, oversized radiators and the smog kit has been removed.

this year's top-rated tires for less!
The engine still has lots of power but the bike could use a new battery.

These bikes are a big bike with lots of powerful performance suited for a REAL rider who can handle lots of power with no problems.

I am the second owner of the used Honda dirt bikes and bought it in 2008 and since that time I've ridden it about 3-4 times a year .

The 2004 CRF 250 X for sale is in good running condition other than some scratches but is still pretty clean.

Call me (no e-mail)if you want more details on the CRF450X at (707) 293 five five five 6 and don't forget to mention that you found this ad on GoGoCycle's Honda Dirt Bike Classifieds www.gogocycles.com when you call.