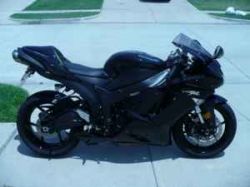 This black 2007 Kawasaki Ninja ZX6R with black rims is one-of-a-kind. I removed the factory exhaust pipe and added a Two Brothers Racing exhaust pipe, a Dyno Power Commander III, replaced rear seat with a Cowl, changed the replaced original tail light kit and dropped the front sprocket down one tooth.
I bought the 2007 Kawasaki ZX6r new in April 2008. I have owned it a little over two years and it has been garage kept since. As of today, it has 6200 miles on it and has been in no wrecks, drops or falls.

I didn't make mods to the motorcycle for racing, just to get better performance out of the motorcycle. The bike's rear tire only has about 700 miles on it since I replaced it last summer.

I have the back seat, two keys, Two helmets, a Ninja leather riding jacket, a tank bag, a motorcycle ramp, plus other parts and accessories that I may find in the garage.

All extras are included in the price for the 2007 Kawasaki Ninja ZX6R for sale. I would rather sell the bike than to let it sit in the garage so I'm only asking $6,900.00.


The 2007 Ninja is located in Grand Prairie Texas and if you're interested you may reach me by sending me your contact information in/questions using the comments farm located directly below this ad that has been provided by Strike Lightning Used Kawasaki Motorcycles for Sale.

Strike lightning would also like to extend an invitation to anyone who is having problems with their own 2007 ZX6R to leave their questions or describe the exact problem that you're having and your contact information in the space below and see if somebody who stops by may offer a solution for how to fix your Ninja.

We also encourage bikers to submit their opinions and reviews of the 2007 Kawasaki Ninja ZX6R for sale to help potential buyers make informed decisions and to benefit the biker community as a whole.

Join in and write your own page! It's easy to do. How? Simply click here to return to KAWASAKI NINJA - Main.