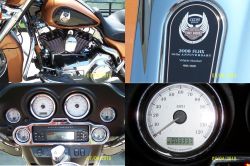 I bought the 2008 Harley Street Glide new in April 2008 and the motorcycle currently has 3,337 miles on the odometer.

The used Harley Davidson motorcycle for sale has all of the Anniversary Edition badges and lot numbers.


The 2008 FLHX Street Glide has been covered and garage kept when not in use and the new owner will receive the cover with the purchase of the cruiser.

The Haulmark Motorcycle Trailer that comes with the bike is a Model Lh6x12d52 Haulmark GVWR 9500 Harley Davidson Trailer. This is a single axle trailer that has all new tires mounted on 15x5 JJ rims plus a matching spare. The enclosed trailer has a side door and a rear ramp door with finished inside walls, ceiling, and locking cabinets.


There is a tie down system in the trailer's floor and walls. It has interior lights, a Quest Products fuse box and the Bargman Breakaway System. The 2008 Harley Davidson FLHX Street Glide w Haulmark Motorcycle Trailer have been garage kept when not in use.

Strike Lightning Used Motorcycle Classifieds would like invite anyone who is having problems with their 2008 FLHX Street Glide to leave their questions or describe the exact problem that you're having and your contact information in the space below and see if somebody who stops by may offer a solution for how to fix your Harley.

We also encourage bikers to submit their opinions and reviews of the 2008 Harley Davidson FLHX Street Glide w Haulmark Motorcycle Trailer for sale to help potential buyers make informed decisions and to benefit the biker community as a whole.

The 2008 Harley Davidson FLHX Street Glide for sale and the trailer are located in Lynnville, Tennessee and my asking price for the set is a very cheap $24,000.00.

If you are in the Lynnville, TN area and would like to take a look you can e-mail me to set up an appointment.
Go here to see more