Search our classifieds to find a good, used Harley 883 for sale. You will quickly see that GoGoCycles is the best place to look for a Harley Davidson Iron 883 that you have been looking for.


As crazy as it may seem to me and to you; there are bikers who for one reason or another have to part with these gorgeous bikes and they end up in our classifieds. 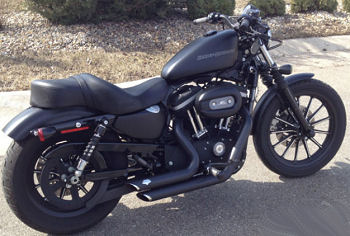 This is the perfect ride for bikers who are into riding and not spending their precious free time memorizing the layout of a dash full of gadgets; the Iron comes with a basic dashboard and no computer technology.

Click below to see more USED MOTORCYCLE CLASSIFIED ADS from other visitors to this page...

The custom 2017 Harley Iron 883 Sportster for Sale is a tastefully customized 2017 Harley Davidson Iron 883. This motorcycle is sporting a custom paint …

The 1992 Harley Sportster 883 for Sale is a nice 92 model sporty that just had its motor done and runs great. Shoot me your best offer for the motorcycle …

1999 HD Sportster Not rated yet
The 1999 Harley 883 Sportster for sale is a GREAT RUNNING and RIDING Harley Sportster 883 that has just been tuned up for the summer season. I WAS TOLD …

The 883 is outfitted with the same Harley motor as all of the 883 models , the Evolution 883 cc V Twin engine. And it has the same trim, steel motorcycle frame as the Harley Sportster 883 Low. Plus, it has a lowered dual shock rear suspension system and is fitted with rubber fork boots up front to give the motorcycle a cool, retro look that outshines the others.

Please make plans to visit GoGoCycles Used Motorcycles for Sale on a regular basis since you never can tell when the exact Harley 883 for sale that you've been looking for since you were a kid may pop up.