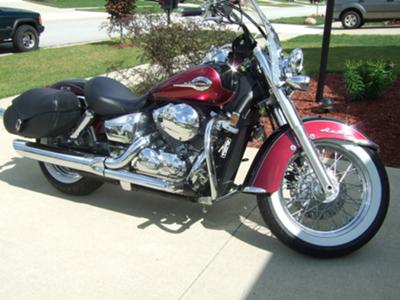 this year's top-rated tires for less!
I thought that those enjoying the picture that Irish Luck shared would be interested in a short 2004 Honda Shadow review.

Honda's 2004 Aero inherited an updated version of the 6-valve 745cc V-twin engine that powered two retired Honda Shadow 750s. That engine's design brought a two spark plugs per cylinder, a single overhead camshaft and three valves per cylinder. However, the Aero utilizes a single 34mm constant-velocity Keihin unit for easy adjustability and what the Honda motorcycle company calls an enhanced V-twin vibe rather than the two carbs the A.C.E. and Spirit housed.

But the biggest change that was made was in the powertrain. The A.C.E. and Spirit's low-rent chain drive was tossed out and replaced with an efficient, low-maintenance shaft drive maybe because Honda had a close watch on the competition. For instance, Suzuki's 800s , Kawasaki's Vulcan 750 and Yamaha's 650 VStars all use shaft final drive making the change an obvious choice for Honda.

Join in and write your own page! It's easy to do. How? Simply click here to return to Motorcycle Pictures.