Jerry Lee Lewis old 1959 Harley Davidson FLH sold for an impressive amount of money yesterday which makes collectors wonder how much is a 1959 Harley actually worth?  The answer to that questions largely depends on whether or not an icon of rock n' roll like Jerry Lee Lewis ever owned and parked it in his garage for any length of time as well as other factors including its condition, etc.  Sellers that we know indicate that the price spread between a plain, vintage Hawg and one that has a history of being owned by a musical legend or ridden by a movie star in an iconic film is very wide, as in wide as the Grand Canyon.

If you are lucky enough to own a motorcycle with an impressive provenance such as the 1959 Harley-Davidson FLH Duo Glide that "The Killer", as Jerry Lee has been called, auctioned off in Osceola County on Saturday; chances could be that the motorcycle Blue Book value can be tossed aside and the actual sale price will go through the roof! 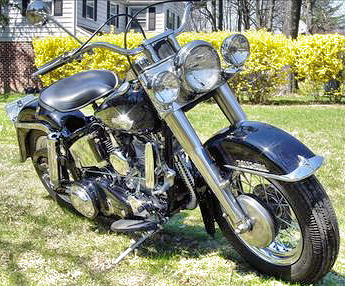 This restored 1959 Harley Davidson FLH that was the Concours d'Elegance 2nd place winner in Ohio in 2005 and the winner of other trophy's throughout the East Coast. The owner of this old Hawg was interested in selling it for $10K cash plus a used Dyna or Softail. Do you wonder if he wished that his bike was once owned by Jerry Lee so he could jack up the price; I do!

How Much Did Jerry Lee Lewis Old 1959 Harley Sell For?

His ride, which was given to him, brought an impressive price near $400,000 at the Mecum Kissimmee Auction. It was reported that the actual sale price of the Duo Glide was $385,000 which is very impressive but still shy of holding the record auction price for a celebrity owned motorcycle which at this time is the red-white-and-blue Harley ridden by Peter Fonda in the movie Easy Rider which went for $1.35 million.

As beautifully restored as this 1959 Harley Davidson FLH Duo Glide may be; we can assume that it would sell for a fraction of what The Killer's bike sold for.

The next-most expensive motorcycle ever sold at auction, was a 1910 Winchester went for $580 grand. All that aside, celebrity ownership may increase collectibility but does not always guarantee a huge increase in value. For instance, I have seen a celebrity owned chopper for sale that was built for a professional athlete sell for a very reasonable price all things considered.

How Long Had Jerry Lee Lewis Owned the Old 1959 Harley?

The FLH was given to him by Harley-Davidson in 1959 and later an identical motorcycle was given to another rock and roll legend, Elvis Presley. It was said (by Jerry Lee?) that "The King" was jealous that "The Killer" had received his Harley first. I wonder what happened to the one that belonged to Elvis; does anyone know?

Jerry Lee apparently was not an avid celebrity biker as during the 55 years he owned this bike there were just 2,257 miles logged on the odometer. Maybe he had another bike he liked better or just preferred to travel by car.

Value of the Bike

Bob Golfen, a writer who follows collectible cars and motorcycles estimated the FLH Duo-Glide's inherent value to be $100,000 to $120,000 and Mecum auctions, the company selling it, broadly agreed with that estimate and were happy, one might think, that it sold for more.

Jerry Lee, at age 79, is still a performing force to be reckoned with and played to a standing-room only crowd on Saturday. As a fan of all things "Killer", I wish I could have been there for the sale of Jerry Lee Lewis old 1959 Harley just to feel the excitement as the price of that vintage motorcycle kept going up and to see Jerry Lee perform his magic one more time.

Join us on GoGoCycles Used Motorcycles for Sale and add your two cents' worth to the discussion on the topic of how much Jerry Lee Lewis old 1959 Harley Davidson sold for.