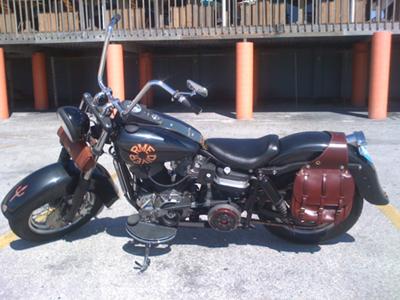 I just finished working on this 1951 Harley Davidson Panhead build that I started as a winter project. The 1951 Harley motorcycle in the picture is a 1951 case with a shovel top end in a mid-1970’s swingarm frame.

this year's top-rated tires for less!
When I got the bike it had been stored outdoors for a while and did not run but was not in terrible shape. I stripped it down to the frame, refurbished the parts that I could and replaced the rest.

I initially went with a rattle can paint job, using black lacquer that I really like the look of but a little gas overflow on the fresh paint changed my mind.

I ended up teaching myself as I went to gold leaf and paint the bike.

Right now I have it sprayed with a base layer of black then multiple layers of gunmetal gray ghost candy with a urethane clear coat.

Hey man! Thanks for sharing the picture of your 1951 Harley Davidson Panhead. From the looks of it, things turned out great! E
Go here to see more