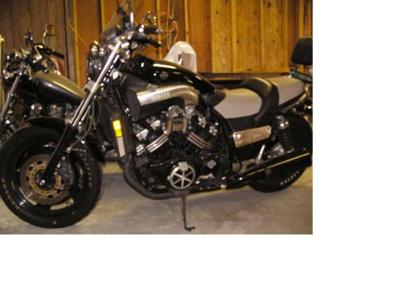 Check the list below to see all of the used 1996 Yamaha VMax Parts For Sale that are currently available on a first come first serve basis. I have all the parts for a 1996 Vmax for sale but the engine! Why buy an expensive OEM part when there is this parts motorcycle that has all the parts for CHEAP?
All of the parts will be removed from the 1996 VMax motorcycle with 14,000 miles (except the engine and forks that are in the picture at the top of this classified.

The pic is of the 1996 VMax parts bike and was taken just before the bike went into the shop for disassembly. This motorcycle was never abused, never dropped, never wrecked.

GoGoCycles would also encourage bikers to submit a review of the 1996 Yamaha VMax to help potential buyers make informed decisions.

If you are working on a 1985 through 2007 Yamaha VMax the used Yamaha motorcycle parts for sale in this ad will fit.

The 1996 Yamaha VMax parts are located in Rock Hill, SC South Carolina (which is near Charlotte, North Carolina) and if you're interested in one or all of the parts please list the parts you're interested in, any questions that you have and your contact information in the space below provided by GoGoCycles and I will get back with you as soon as possible.
Go here to see more