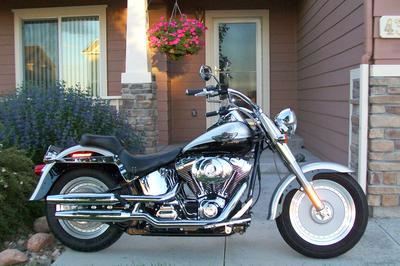 The 2003 Harley FatBoy for sale is a 2003 Harley Davidson Fat Boy 100th anniversary Edition that is in excellent used condition and runs great.

this year's top-rated tires for less!
The Special Edition Fatboy comes with a garage door opener system, a racing tuner, a motorcycle cover and a new battery.

It has always been garaged and kept covered so it looks fantastic with just 16700 miles on it currently.
If you would like to review the Anniversary Edition Fatboy or share your opinions on the motorcycle for sale, you may use the comments form below this ad to do so.

Thanks for visiting GoGoCycles Used Motorcycle Classifieds and for taking a look at the Harley Davidson Fatboy for Sale.

My asking price for the 2003 Harley FatBoy for sale is cheap enough that I doubt that it can be beat on Craigslist or in an Ebay auction, only $8500!

If you want to take a look at the FatBoy or get in touch for more details shoot me an email and don't forget to mention that you found this ad on GoGoCycles Used Motorcycles and Parts for Sale www.gogocycles.com.
Go here to see more