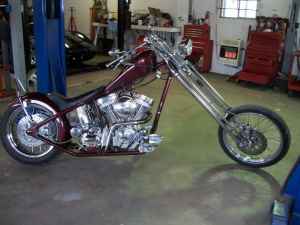 The 2005 Jesse James West Coast Chopper for Sale that you see in the picture. This is a great opportunity to buy a custom Jesse James chopper for an amazing price!
Jesse built this custom motorcycle in 2005 and since then it has had only two owners and has been ridden approximately 300 total miles.

The Rev Tech 100 inch engine screams like crazy and it has a six speed transmission that puts you up to speed in a flash!

The chopper's paint is Burgundy with Ghost flames. The rear tire of the 2005 Jesse James West Coast Chopper for Sale is a 200-55-18.

The wire spoked wheels and springer front end make this one more good looking bad boy of a bike. The title states that this is a ASVE model HR3.

One of the very unique custom features of the custom built motorcycle is that there is a fuzzy picture of what looks like a revolver cylinder with "Jesse James" inscribed in each of the five cylinders.

You can contact Troy using the space below provided by Strike Lightning for listing Used Motorcycles for Sale and the owner will get back with you as soon as possible.

Strike Lightning would also encourage bikers to submit a review of the 2005 Jesse James West Coast Chopper for Sale to help potential buyers make informed decisions and to benefit the biker community as a whole.