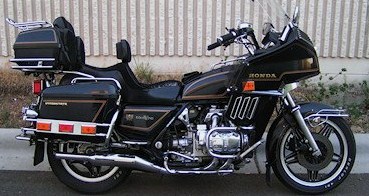 What can I say about my Honda GL1100 Goldwing except that I have always wanted to own either a vintage Indian or a Harley Electra or Hydra Glide with continental kit with lights.

Well, needless to say as a trucker for the city I can't afford one what with the prices associated with home ownership and operating on a shoestring budget they may only be parts of a dream for many years to come.

I have owned several motorcycles, this only being my second Goldwing in over fifteen years of enjoying the riding lifestyle. I have had to put a lot of sweat and blood into this GL1100. Even with having bought it used I never would have thought I would have to spend so much on parts with a Honda Goldwing as they have a reputation for having very few problems. Along with the cost spent for parts there was a valve timing job that was a pain to complete but I got 'er done. The paint and everything else you see in the Honda GL1100 motorcycle picture is OEM.